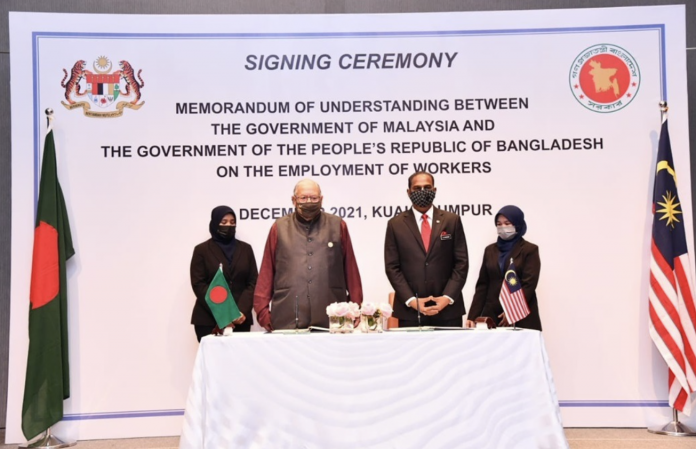 PUTRAJAYA, Dec 19 — Malaysia and Bangladesh today signed a memorandum of understanding (MoU) on the recruitment of Bangladeshi workers, effective for five years until December 2026.

Saravanan said in a statement that the MoU outlined the responsibilities of both countries, including those related to the employers from Malaysia and workers from Bangladesh as well as the duties of private employment agencies in both countries.

“The MoU is a follow-up to the approval of the Cabinet meeting for it to be finalised immediately as the previous MoU expired on Feb 17,” he said.

According to Saravanan, the implementation of the MoU would be regulated by a group, Joint Working Group (JWG) that will comprise members from both countries.

He said that as of Nov 30, a total of 326,669 Bangladeshi nationals were working in Malaysia, with the majority of them being employed in the manufacturing sector (111,694) and construction sector (136,897).

“The inking of the MoU is expected to meet the urgent need for foreign workers, including in the plantation sector, with the Cabinet having already approved 32,000 of them via special exemption.

“This is because there is a restriction on the entry of Indonesian workers for the plantation sector until the MoU on the Indonesian Domestic Servant (PDI) has been signed,” he said.

Saravanan said the Human Resources Ministry had also stipulated that employers who wanted to recruit foreign workers would have to provide housing or accommodation facilities as stipulated under the Workers’ Minimum Standards of Housing and Amenities Act in 1966.

“This is meant to tackle the element of forced labour related to accommodation facilities or housing for workers,” he said.

In line with the decision of the Cabinet meeting on Dec 10 to allow foreign workers to be recruited for all sectors, he said the standard operating procedure (SOP) on the entry of foreign workers had been finetuned and improved.

He said the SOP covered four phases, namely pre-release, upon arrival, after arrival (quarantine) and post-quarantine.

The pre-release phase includes aspects on getting fully vaccinated for COVID-19 in the country of origin and the Real-Time Polymerase Chain Response (RT-PCR) screening test to be done two days before departure.

In the arrival phase, the foreign workers will only be allowed to come in through one international entrance, namely the Kuala Lumpur International Airport (KLIA) for air travel.

“In the post-quarantine phase, the foreign workers will be taken to their respective work places and  undergo health checks by Foreign Workers Medical Examination Monitoring Agency (Fomema),” he said.

According to him, the entry of foreign workers, including Bangladeshis, would be strictly monitored based on stipulated SOP by the ministry in collaboration with the Ministry of Health and National Security Council (MKN).