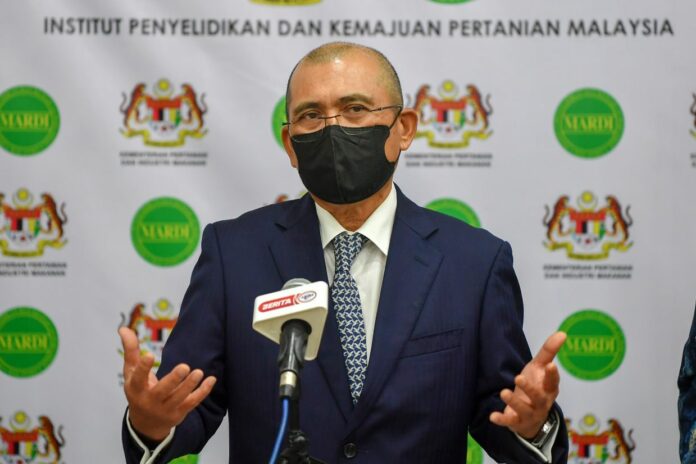 KUALA LUMPUR, Jan 21 — Malaysia has been ranked 39th out of 113 countries in the Global Food Security Index (GFSI) by The Economist Intelligence Unit (EIU) for 2021, according to Agriculture and Food Industries Minister Datuk Seri Dr Ronald Kiandee.

He said Malaysia was listed in the top eight among Asia Pacific countries and placed second after Singapore in Southeast Asia.

“Nevertheless, strengthening the country’s food security is an ongoing process and we must continue to work to improve our position in the GFSI in line with the government’s intention to continue to empower the agro-food sector under the 12th Malaysia Plan,” he said when delivering his 2022 New Year message today.

He said the initial phase of the implementation of DAN 2.0 which is a comprehensive policy to ensure the country’s food security is competitive and sustainable based on key government policies including the Shared Prosperity Vision 2030 and the Sustainable Development Agenda 2030, was among the Ministry of Agriculture and Food Industries’ (MAFI) key achievements last year.

He said DAN 2.0 was not just a policy document but must be used as a guide and reference in all initiatives implemented by the ministry.

“In this regard, I am confident that MAFI will implement all the strategies and initiatives that have been outlined under DAN 2.0 and the DSMN Action Plan according to the implementation period to achieve the set targets,” he said.

He said DAN 2.0 had set modernisation and smart agriculture as key game changers and the main policy thrust that would be focused on to create successful transformation in the agro-food sector.

Ronald said the sector’s contribution to the country’s Gross Domestic Product was expected to increase to five per cent by 2030 in contrast to 2.3 per cent in 2020.

Meanwhile, he said that the National Ruminant Board would be established and operate in phases starting this year to further boost the industry’s growth, especially in enhancing the country’s beef and dairy production.

“Through these plans, the local fresh beef and milk production target can be increased to 50 per cent of the self-sufficiency level (SSL) for beef production and 100 per cent SSL for fresh milk by 2025,” he said.

On the new date for the National Farmers, Breeders and Fishermen’s Day (HPPNK) 2021 Ronald said it would be set after taking into account the date for the Malaysia Agriculture, Horticulture and Agrotourism (MAHA) 2022 exhibition, adding that he hoped both programmes could be carried out this year.

HPPNK 2021 was initially scheduled to take place from Dec 21 to 23 last year but was postponed due to massive floods hitting several states in the country.

26 CCTVs to be installed in Kuching city