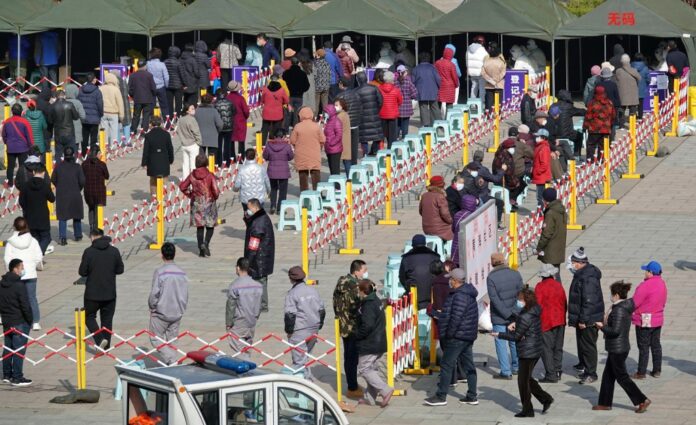 ISTANBUL (Turkey), March 15 — Chinese health officials on Tuesday admitted the COVID-19 situation in the country is “grim and complex” amid a dramatic rise in daily cases.

“The COVID-19 epidemic situation in China is grim and complex, making it more difficult to prevent and control,” said an official of the National Health Commission as reported by Anadolu Agency.

Out of 31 provinces in China, 28 have reported COVID-19 cases since the past week.

The official, however, said “the affected provinces and cities are dealing with it in an orderly and favourable way; thus, the epidemic overall is still under control.”

The Chinese mainland has reported 15,000 COVID-19 cases during this month, the official said.

“With an increasing number of positive cases, the difficulty in preventing and controlling the disease is also increased,” the official added.

The infections has surged significantly for the first time in two years since the pandemic began, when the authorities imposed a strict 77-day lockdown to contain the coronavirus.

The Jilin province in northeastern China, which has a population of more than 21 million people, has been the hardest hit by the latest wave of infections, with 4,067 cases reported there alone. The region has been placed under lockdown.

As Jilin faces a “severe and complicated situation,” Zhang Li, deputy chief of the provincial health commission, said the administration will take “emergency unconventional measures” to push for a nucleic test across the province, state-run daily Global Times reported.

Changchun and Jilin cities are undergoing a rapid spread of infection.

Several cities, including Shanghai and Shenzhen, have imposed strict lockdowns, forcing local and international manufacturing companies to shut their businesses as part of the measures to contain the virus’ spread.

Authorities in the Jilin province have built five makeshift hospitals in Changchun and Jilin with a capacity of 22,880 beds to manage the COVID-19 patients.

To combat COVID-19, around 7,000 soldiers have been mobilised to assist with anti-virus measures, while 1,200 retired soldiers have volunteered to work in quarantine and test sites, according to the report.

Several officials were sacked over their failure during the fresh virus outbreak.

At least 149 dead, 76 injured in Halloween stampede in Seoul