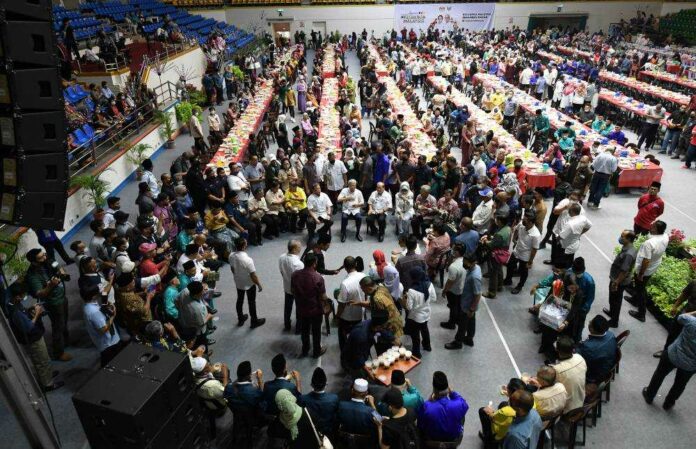 Ismail Sabri’s arrival at the event was greeted with a lion dance, hadrah and ngajat dances involving various ethnic groups in Sarawak based on the Keluarga Malaysia concept of “Inclusiveness, Togetherness and Gratitude”.

The feast was also attended by Sarawak Premier Tan Sri Abang Johari Tun Openg and the top leadership of the state.

The menu for the Kenduri Rakyat, which is one of the programmes the AKM Tour here, was a variety of special Sarawakian Malay dishes such as Nasi Minyak, Daging Masak Hitam, Ayam Masak Merah, Sambal Goreng Ikan Masin, Keceni Nanas and fruits and Ais Batu Campur (ABC) for dessert.

At the end of the luncheon, the Prime Minister and guests were also entertained with a ‘Bermukun’ performance, which marked the closing of the Kenduri Rakyat.

‘Bermukun’ is a traditional Sarawak entertainment that combines dance performances and rhythmic verses accompanied by the beat of drums and violin music.

The AKM Tour reflects the strength of the country which is tied to the value of a good education in a family, in addition to the phrase Keluarga Malaysia being considered more inclusive because it transcends the boundaries of religion and race.

During the three-day Sarawak AKM Tour that started on Friday (Aug 5), various events and activities were organised with the involvement of 28 public service agencies that provided various assistance and services.