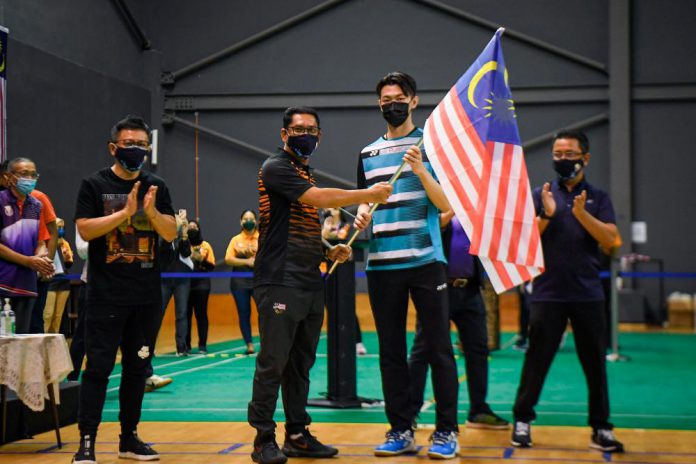 KUALA LUMPUR, Sept 18 — Youth and Sports Minister Ahmad Faizal Azumu is optimistic that the national badminton squads are capable of putting on a sterling performance at three major championships – the Sudirman Cup, Thomas Cup and Uber Cup – that will take place soon.

Ahmad Faizal said based on player discipline and performance that are at very good levels, and the lack of any worrying injuries, he believed that the squads can mount a strong challenge at the three upcoming team championships.

“I am not expecting the impossible from the teams, but I want to see them represent our country well by maintaining a high level of discipline, sportsmanship and build a good reputation on and off the court to earn the respect of everyone who is watching.

“I hope they play well and understand that all Malaysians, from the Yang di-Pertuan Agong to ordinary citizens are with them as they fight. When they jump, we jump, and as they falter and rise again, so do we.

“I do not want to pressure them but I hope for a good showing at all three championships,” he said at a media conference here today before visiting Academy Badminton Malaysia at Bukit Kiara with his deputy Datuk Seri Ti Lian Ker.

He had earlier spoken to the squads’ players  as he handed over the Jalur Gemilang (National flag) to Thomas Cup and Sudirman Cup captain, Lee Zii Jia. The singles player then led the team in reading their pledges.

The Sudirman Cup will take place in Vantaa, Finland from Sept 26 to Oct 3, while the Thomas and Uber Cup Finals will be at Aarhus, Denmark from Oct 9 and 17.

In the last editions of the Sudirman Cup in Nanning, China in 2019 and the 2018 Thomas Cup in Bangkok, Thailand, the national squads crashed out in the quarterfinals, while the women’s team failed to get past the group stage in the 2018 Uber Cup.

Meanwhile, Ahmad Faizal, who was amazed at the academy’s facilities and effort put in by the Badminton Association of Malaysia (BAM) in nurturing young talent, suggested that other sports associations use similar models.

He said the badminton family concept practised by BAM by housing over 60 young players, aged 13 to 18, to learn and hone their badminton skills under one roof is something to be emulated.

“These players are trained from the start in terms of education, discipline among others. Everything is here, including homeschooling. So when we talk about academies, this is a proper academy,” he said.

Meanwhile, BAM president Tan Sri Mohamad Norza Zakaria conveyed his appreciation to Ahmad Faizal and Ti for visiting the academy, although just having started their duties at the end of last month, and hoped that their assistance will continue in the future.

47.5 per cent of adult population given booster dose